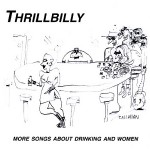 Having spent most of the past decade treading the local boards, as well as logging incalculable miles of pavement on the road, Thrillbilly are calling it quits. Leader J. Bowman has always maintained a distinct love/hate relationship with existence, his songs filled with drunken musings and mournful, morning-after insights. The dozen songs contained within this, their third full-length album do not depart from that scenario, but reflect Bowman’s increasing maturity as a writer, as well as the individual member musicians’ own ripening abilities.

The most noticeable addition to the guitar-driven Thrillbilly sound are the organ and piano textures contributed by keyboardist Rob O’Hearn. O’Hearn, a twenty year veteran in the local scene (he played with Jack Charles’ Mien Street in the mid-80s), layers nearly every tune with well-conceived, neatly executed keyboard stylings, expanding the musical dimensions of the material. Lyrically, Bowman’s narratives almost seem to refer to each other, as if they were chapters in a book.

The moody ballad “Darlin’ It’s Cold” continues the trend, O’Hearn’s chiming piano octaves ring brightly over a bed of acoustic and electric guitars; Bowman’s doleful vocals hovering above it all like a ghost. “Gimme Somethin'” is an volatile rocker, fueled by O’Hearn’s smokin’ organ fills and chunky powerchords from Dybvig and rhythm guitarist Doug Lindstrom. Bowman’s husky vocal is a departure from his usual delivery, typifying the sense of change that courses through the heart of the material.

“Skinhorse Tune,” a reference to another departed Portland band, portrays an unraveling mindset: “Got a Skinhorse tune, it’s playin’ in my head/Sounds so close to me right now I could live on red wine and bread.” Yet another rueful plaint.  Dybvig’s stuttering riffs and slashing boogie chords and fiery solos propel the rollicking “Second Skin,” tangibly elevating the mood. Bowman rises to the occasion with an inspired vocal contribution to what is indubitably the highpoint of the set. An archetypal Thrillbilly number.

In their run, Thrillbilly created a boisterous body of work, reflecting their Country, Folk and Rock roots, with tales of wine, women and the long, winding journey of the road. As one of the top local bands of the ’90s, their legacy will not soon be forgotten. This album serves as a befitting farewell. 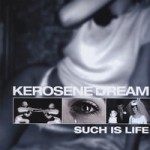 Such Is Life
Self-Produced

It was two years ago to the month when last we heard from Kerosene Dream in these pages, and three years since the bands’ “unplugged” inception. And in that time the members of the band have honed their considerable instrumental chops and sharpened their songwriting skills. The result is that: this is one of the ten best albums of the year; one sure to be a local chart-topper well into next year. There is nary a clinker among the dozen songs presented here. Each displays careful, loving care in its production— with enough musical references to the “classics” to fill a Time-Life collection.

The two songwriters, vocalist Bart Ferguson and acoustic guitarist/vocalist Dave Coey alternate songs on this outing, although the cohesiveness of the instrumentation, the strength of their mutual harmonies and the unified themes within their individual lyrics, lend amazing consistency throughout the entire affair. Ferguson, especially, demonstrates tremendous growth as a songwriter; indicating that he has obviously studied the craft with great care, over the past few years. Before, Coey was the better songwriter. Now they are equals, both very good.

The album kicks off on a strong note. Straight from the gate, Coey, Ferguson, drummer Derek Brown and bassist Dave Kilner knock out stellar three-part harmonies on the chorus of Ferguson’s “Come Undone.” Citing the laid back feel of Tom Petty or Wilco, the song unwinds like a prayer and a peptalk. Ferguson’s “Wagon Wheel” is more uptempo, with a wisp of Bachman Turner Overdrive in lead guitarist Al Toribio’s smart riffage and Brown’s rhythmic propulsion, punctuated by Ferguson’s vibrant harp solo in the turnaround.

Coey’s lively “Summer Day’s” contains a hit chorus, reminiscent of Talking Heads’ “And She Was,” sharing a similar sense of jubilant ebullience. Strong harmonies, especially in the well-conceived middle break, and Toribio’s tasty fills, make for a very special musical event. Toribio’s Knopfler-like phrasings on Ferguson’s “C’est La Vie” echo a theme from the Moody Blues’ “In Your Wildest Dreams.,” especially in the chorus. The song acquires sonic depth from guest Wayne Thompson’s thick organ pads, as well as a clever use of a Hip-Hop effected drum beat in the intro and break. Great.

Coey counters with the jaunty “Pictures,” a Cajun flavored ditty reminiscent of Neil Young’s “Love Is A Rose.” Ferguson’s powerful Instrumentally, “Unforgiven” starts off evoking in the verses, elements of Young’s “Cowgirl In The Sand” and the chorus to Tom Petty’s “Last Dance For Mary Jane,” before evolving into Lennon’s “Imagine” in the chorus. Ferguson’s pointed lyric cuts right to the chase: “Fat chance with a pocket full of truth and lies/Will you have what it takes when you’re scrutinized?/You beat the drum and the day to day rigmarole/With one hand on the table and the other below.”

A faint touch of XTC’s “Snowman” runs through the ringing guitars of Coey’s “Nothing Gets By Us.” Strong vocal harmonies in the turnarounds call to mind Kansas in their prime. Guest Dennis Retzlaff’s moaning cello line adds a piquant edge to Ferguson’s tender ballad “Life To Life,” which explores reincarnation as a lyrical theme. “I Can Keep A Secret” is another solid rocker from Coey’s pen, accented by Toribio’s blustery slide guitar flourishes. Right on the money!

Ferguson borrows the groove from Springsteen’s “Fire,” then moves it in a different stylistic direction with the Country twang of the chorus.  Coey’s pretty ballad “Long Goodbyes” hearkens to Kerosene Dream’s “unplugged” roots, with only Ferguson’s plaintive harmonica piercing the cascade of acoustic guitars. Coey’s road-weary vocals and deft lyrics, incorporating seemly circus imagery, make for a masterful summation of a circumstance which folksinger once referred to as “just another town along the way.”

Kerosene Dream’s heritage runs deep in the rich, regional Alt/Country scene, with roots reaching back as far as Nine Days Wonder, The Renegade Saints and The Strangers. They have maintained their tradition, while continuing to grow as musicians, songwriters and human beings. This wonderful album is the latest and best chapter yet, in that ongoing story.