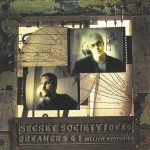 There is really nothing more that needs to be said for this recording. It is absolutely brilliant: from its conception, to its utterly stupendous execution; from the clever, intelligent lyrics to well-hewn melodies, to flawless arrangements, in a variety of styles— each exquisitely matched, thematically and musically. It’s simply a brilliant album.

Still, a production of this stature deserves deeper analyses. And who better to expand and extrapolate than yours truly? It is an obligation, which, in this case, is a true pleasure. In fact, the only quarrel one might have with this entire project is the pendulously unwieldy ponderousness of its icky moniker. If such a society were actually to exist (as it’s authors claim), and lord knows there are countless secret societies in the world (which I’d tell you about, but it’s… um… a secret), it seems like a difficult club to join: having to be dead and all. One supposes that’s perhaps the first mystery among the 1 million.

But what’s in a name? This band could be called Instant or Wishful Thinking or Just Plain Bill and would still sound as sweet. The term “band” is, like everything else that has been put forth thus far, overstated. It’s really just two guys. Andrews Jenkins sings and Edmund Gelmetti plays bass. They both add an array of guitars, synths and assorted samples, including superior drum programming.

Together they create spaciously dense, sonically vast sound collages, which incorporate elements of nearly every form of popular music from Trip Hop, Techno and Electronica to Rock and Jazz, Folk and Indo-Celtic. All of it is strained through an elaborately succinct series of filters— effects on effects and samples of samples— which, in many instances, transform the original sounds into something else, altogether different.

Jenkins and Gelmetti are no strangers to the Oregon music scene. Jenkins worked with the Cherry Poppin’ Daddies in a production capacity in the early ‘90s, while attending college at the U of O in Eugene. Gelmetti played keyboards with several top Portland bands in the early ‘90s, including stints with the Beauty Stab, the Killing Field and Josephine’s Ocean. The two met up in 1995 and have been working together ever since, more or less as a secret society of living dreamers. As far as we know, this is their first release.

The lead track, ”One Wall,” kicks off with jazzy, syncopated, brushed toms and snare beats and zoomy upright bass, which play against eerie sounds: which whoosh, whir and wheeze with facile mechanical ease. The effect on Jenkins’ vocals creates a constricted aura, across which he transmits the essential concept behind the album. The result is sort of as if Trent Reznor sang with and produced the Alan Parsons Project or Pink Floyd circa “…Crazy Diamond.”  Very interesting stuff.

With “Hey,” the boys effectively mix a reedy, drum and bagpipes corps sample of “Garryowen” or some such highland march, over hip, hyper drums and bass riffs. Meanwhile Jenkins intones, Marc Bolan-like, a simple koan— “Say what you mean and mean what you say.”  The infectious return of the bagpipes in the rousing chorus, punctuated with the solitary soccer cheer, “hey,” make for a memorably unique atmosphere; as does the clever oscillating filter effect thrown on the bagpipes in the instrumental break. Great!

On “Kaboom Baby,” random electronic arpeggios ditz and dart around the auditory landscape, while a rubbery bass bounces across the horizon, with various guitar and key parts springing up and disappearing; over a sparse, but fat drum beat. A droning mantra to the apocalyptic voltaic galvinism of sexual chemistry.

Invoking the Beatles, 10CC, E, Radiohead and later-period Tears For Fears, the beautiful “Weight Of The World” captures the complete significance of this band.  Splendidly constructed, Jenkins and Gelmetti build a symphony out of a haywire little four-bar sample and Rhodes piano chord clusters. Buzzing and humming like a crazy clockspring under a tense thundercloud of instrumentation, the song gradually unfolds into a magical chorus, before receding again into its component parts for another verse. An uncharacteristically straightforward vocal is buffeted by surfeits of string patches and pads. Gelmetti’s stirring string run at the coda recalls John Paul Jones’ synth work with Led Zeppelin. Simply stellar. One of the greatest songs ever produced in Portland.

Among the three instrumentals, “1756” fuses Middle Eastern rhythms and modes with Celtic changes in a brooding stew— which utilizes an array of electronically generated sound beds as its ultimate foundation. Very cool, innovative stuff. A soundtrack for time travel, to be sure. Fat drum and bass grooves and jagged arpeggiating synths wrestle for the forefront on the Techno-informed “OK,” (computer?). The stormy finale, “Frenzy” whirls on a rhomboid bass synth figure, as raindrop loops leak down the periphery; a death bell knelling solemnly across the sinister panorama. Slowly a groove descends, slapping a beat into place. Subtle variations evolve over time, as a chorus of women voice a plaintive holy chorus. A rich interpolation of sounds and moods.

“Someone Please” reprises the E-like melodicism that SSDD:MM displayed earlier with “Weight…”  The tender ballad “Do You Know?”  focuses on warm vocals, with thick Beach Boysish harmonies throughout. The Beach Boys spring to mind on “Think Again,”  as if ELO’s Jeff Lynne joined Brian Wilson in crafting a gorgeous hymn, of timeless beauty. Truly wonderful. “Nevermind” could easily be a Nine Inch Nails take. Jenkins utters the vocals in a familiar, agitatedly detached cadence, over viscous layers of bubbling synth quantizations and pulsing kick drum propulsions.

Secret Society of Dead Dreamers & 1 Million Mysteries are more complex than even their curious appellation. Their superior technical abilities are matched by the incredible imagination and ingenuity they apply to each track. Beyond that, Andrews Jenkins and Ed Gelmetti display a keen aptitude for writing terrific songs, when they are not exploring other avenues of musical expression. Their knack for invention and singular attention to detail thus far lacks a peer in this city. For, without a doubt, this record is a true work of art of profound proportions. 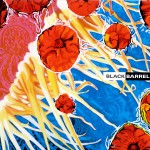 Guitarist, singer/songwriter Bill Wadhams’ route to Portland has been circuitous to say the least. Having dined at the table of success in ‘85— via huge MTV exposure with the synth Pop band Animotion (wasn’t it Terri Nunn?) and the song “Obsession,” a disillusioned Wadhams soon drifted away from the band rather than sell out to the music business. He eventually settled into a job at Weiden & Kennedy as a graphic artist and commercial jingle writer. It was in the latter capacity that Wadhams began working with his eventual partner, engineer and drummer Bruce Robertson. For the past three years Wadhams and Robertson have writing and working together under the name Black Barrel.

Theirs is a mature sound, that fits in comfortably in the Adult Contemporary market. Calling to mind at times the Rembrandts or Crowded House, while occasionally tossing in a sense of social conscience and contemplative internalization— themes for which Don Henley has become renowned, in his post-Eagles years. Wadhams and Robertson cut through a variety of musical styles, ranging from light Rock, to breezy, Jazz-tinged numbers, to introspective Folk ballads. While not all work stylistically, several songs, especially the ballads, stand out. Crisp production highlights Wadhams’ vocals and sparse electric guitars, occasional acoustic guitars and an intermittent aggregate of keyboard splashes; as well as Robertson’s solid drumwork and effective background vocals; and consistently muscular basslines provided by Wadhams’ brother Tad on half of the tracks, Phil Baker on the other half.

“15 Minutes Of Shame” is a bit of a rocker, with chunky electric guitars, twanging like elastically supple cables. Neat synth horns in the chorus help to punctuate a lyrical storyline that seems to mirror the escapades of John and Lorena Bobbitt. Another uptempo tune, “ The Difference,” takes the sentiment of John Lennon’s “Imagine” in a completely alternate direction: espousing the possibilities contained within the vicissitudes of the human species, rather than the unity sought within the former model.

While “Taxi” seems to pursue a Dave Matthew’s-like form of acoustic folk Jazz, ala “What Would You Say,” (without Matthews’ ceaseless penchant for incessant vocal muggery), “Who Do You” hints at a sort of Steely Dan sensibility. A decent chorus informs the latter. But others among the uptempo material do not fare as well. “How You Know” and the similarly constructed “Haven’t Tasted,”  lack any real energy, conviction or purposefulness.

Wadhams’ vocal instrument is effective, but somewhat colorless, often wanting for emotional depth and scope of passion. “Nineteen” is an exception. Aimed at an older generation, the lyric reflects a sense of yearning: a father watches his son prepare to leave the family and venture out upon his own; to make many of the same mistakes his father did at the same age. “Somedays Come” nicely integrates Wadhams’ signature low-string guitar line (reminiscent of the Animotion days) with a Crowded House-like presentation, and especially affective chorus. “Mr. Wrong,” a pretty ballad, benefits from a well-placed 3/4 time break in the midsection.

The final three songs are among the strongest of the dozen contained on the album. Perhaps the best is “1-900,” a Henley-like lament, which neatly captures the loneliness and desolation which can drive an individual to solicit the advice of a phone psychic— who will respond with “whatever you want to hear.” A beautiful, shimmering guitar figure guides the instrumental aspects of the song. The universality of the subject matter and a great arrangement serve to set this track apart from rest.

Although the confessional qualities of “Nothing To Hide” invoke reflections of the Gin Blossoms’ or perhaps the more grown-up observations of their older brothers; they also help to create a tangible momentum in the song. And the inspirational ballad “Might Come Around” offers genuine insight into the human condition.

There is little about which to quibble with Black Barrel. Wadhams and Robertson are certainly honest in the way they present themselves musically. They are not trying to be something they are not. But, at the same time they do not push the envelope much with their presentation. Instead they are snugly sealed inside of it. Still, they are good at what they do— crafting Rock music with all the sharp edges smoothed away to complete harmlessness.